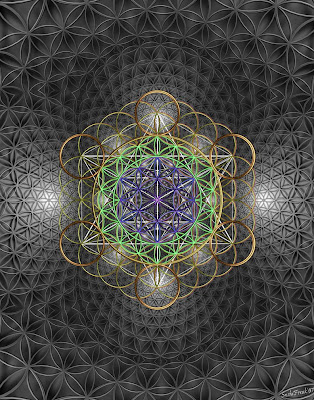 The Etheric pattern recognition of Existence is being revealed, interpreted and realized by us in varying degrees and at various stages in our lives. These pulsing, thought induced wave-form patterns exist on transdimensional levels across the entire spectrum of our consciousness.

Our third-dimensional aspect, this 3D matrix, is often misrepresented as the only viable aspect of human awareness. It is however, the perfect staging area for this interplay of wave patterning from the very densest to the most sublime. We are, after all, perfectly situated between the infinite expanses of space as it pushes outward and inward simultaneously. Human Consciousness exists as the nexus point between the macrocosm and the microcosm. But, we all knew that. Right?

As a struggling society of conscious beings, we are collectively moving towards a new level of pattern recognition that we both share and participate in at the same time. Imagine infinitesimal fractal-like patterns overlapping one another creating a magnificent tapestry that defines itself with elements of contrast and force. This contrast does not necessarily imply conflict of force although their
reflective patterns may often be confused and cause strife. We are afforded another view of this polarity.

Instead, we may observe this as a threshold portal, where opposing elements are present, but in equal measure, like the aperture of a camera. In this way, we are now collectively obtaining spiritual intelligence that is being freely shared with everyone who is open to interpreting the information, as opposed to being shrouded in secrecy from societal fear of persecution. The spontaneous informational
free-for-all of the internet on the one hand is being equally matched and challenged by the intentional network programming of televised terrorism on the other.

As a part of the developing conscious atmosphere at this time of reckoning, those higher aspects of human consciousness within each of us, is naturally seeking a balance point in the amorphous soup, in much the same manner a scuba diver will establish a ‘zero buoyancy point’ to float at a desired depth in the ocean. In this manner, we are all seeking a comfortable depth from which to float in this Liquid Consciousness; something that is distinctly different than the solid, land-locked mentality of societies over the past ten thousand years.

The re-emergence of Gaia Consciousness represents a new threshold of awareness and understanding that is being accessed by greater numbers of people every day, and represents the essential elements of a great “Shift of the Ages” as it’s been called.

As we allow for the more fluid, liquid perspective to take hold, we can access even more freely, the so-called spiritual realms or dimensions of being that have long been perceived, but frequently misunderstood while being shrouded in mystery and fear. Certain things may be realized from this:
Not everything in nature is purely physical, although physical patterning represents the densest form of matter, and therefore the most discernible of levels. However, up to now we’ve placed far too much emphasis on our solid physicality – to the point of distraction.

The actual physical manifesting aspect of each of our personal blueprints may possibly become the seminal patterns we establish as wave frequencies, such as a tonal pulse that, in turn, has multidimensional implications. This unique wave-form pattern, like a cosmic fingerprint, defines our very signature of existence across time and space. It also represents our Heart Song: a sonic frequency pattern that is much slower and therefore, a much more ‘approachable’ spectrum than the speed of light.

Our individual wave frequencies create interference patterns between themselves and varying degrees of resistance manifests as negative energy bursts while allowances (zero impedance) create positive ones. The ebb and flow, if you will. The resulting unique energy pattern reshapes the essential tapestry of existence and thus becomes of critical importance and a key to understanding our participation in the overall design. Using such electro-magnetic vocabulary offers both an adequate description of our physical world and may also serve to describe the subtle realms of consciousness as well.

Furthermore, each of our individual pulse patterns contribute to a fibrous network, like a freshly pealed tangerine, a kind of lattice-like light pattern that perform such as fractals: all interacting with one another on the macro-microcosmic scale we’ve come to describe as physical reality. All of us in any level of awakened state are bombarded with these energy patterns, each demanding our attention so as to verify their own existence. In a like manner, our personal energy cords each desire similar verification. They function as navigational tools, while remaining intent upon finding that passage that might link us to the Source of All That Is. The Core Pulse. The Heartbeat of the Universe.

The positive nature of our existence on the physical plane is to generate a penultimate point of potentiality for consciousness growth to be made manifest.

Thus far in the relatively short recorded history of our species, that point has come to represent a misplaced survival-instinctual conflict for dominance over one another, that has created fear and separation as its primary byproducts.

This phase of humanity is now closing while giving rise to a new sensibility of tolerance and co-operation, still in the birthing process complete with painful surges.

As we come to recognize these opposing forces as twin vortices moving like double propellers on a boat able to generate considerable force of movement, we will once again tap into a magnificent power source for manifesting all manner of things on the physical plane.

Simply allowing for this to be so is the essential key to this new understanding. All that is required is to study and learn to recognize the wave forms being generated and sharpen our personal awareness skills so in order to catch and smoothly surf these waves of change and play these profound notes of the symphony while weaving our threads of desire through this glorious tapestry of existence.

Posted by Douglas Dolphinus at 12:40 PM No comments: 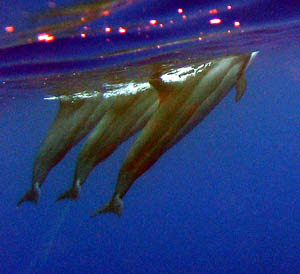 How elemental can it get, I ask myself. If I just focus on the basics I can see that within each moment of realized consciousness, I’m given a choice. My ‘free will’ selection is a choice to decide whether or not I am going to accept each new moment in a negative or positive manner. Active or Reactive. Whether or not I will shrink from it with fear and uncertainty because of some programmed response, but instead, embrace each ensuing instant knowing from my core that it is in my greatest good to act upon it with Unconditional Love.


So simple and miraculous, yet it remains the central challenge in my life. I am learning to ‘breathe’ within this rarefied air, so that with each intake I’m consciously aware of myself, and the world around me. Like the admirable Cetaceans, who have evolved the biological imperative of being conscious of every breath they take, I too want to raise my level of awareness so that I seize each moment as if it is my first and last! I wish to intentionally move through my existence with the purpose of allowing each moment to exist as the Zero Point: that perfect state of being where everything and nothing are present at once, but in a state of harmony instead of a presupposed conflict between Dark & Light. Where infinite potential is exposed in full while nothing is hidden behind the screens and filters of my ego’s rational demands to adhere to the formal policies of the programmed, Consensus Reality.


There can only be one place where such a perspective can exist, it seems to me. It is plumb square, dead-centered, between the two binary codes of Yes & No that we have been lead to believe are separate, when in fact, they are part of the same oneness that makes up the whole. It is that same place, the Zero Point that mystics and philosophers have been twirling around from the beginning of recorded Time. And it is the same place that Quantum Physicists have been caught chasing their own tails as the observer and observed become indistinguishable.

* * *
Metaphoric explorers returning to the campfires of my collective intellect, report that what they have found is a paradox. A Pandora’s Box. Dare I open it? Can I afford to let go of the need to know long enough to see that it doesn’t really matter in the first place? To recognize that they’re all magnificent efforts to tantalize my consciousness with an utter false sense of being able to Know something…anything, when the only true knowing is NOT knowing — NO-ing, that is. Like the old Hindu proverb: Non-Attachment Equals Liberation. Can I afford to let go of such needs? Do I have the courage and faith to believe in myself, and my connection to the ALL THAT IS, to actually continue my trek into the Void? Into The Abyss of Pure Consciousness?


Well, yes, I say. I’d done it the other way all my life and it led to halls with no doors in the walls — a maze, constructed out of fear and desire, designed to push me forward towards some useless end. I’ve left that behind now and have asked Spirit to use me in such a way as to allow Essential Joy to reign in my life, so that I may demonstrate the marvelous affects of Living My Dreams.

I’ve cut whatever attachments I had to outcomes and removed all expectations from my field of vision to enable a maximized opportunity to live in and be a complete part of, this Eternal Now. My existence therefore, is like walking a tightrope all the time, but without the anxiety of falling into the Abyss, rather, with full anticipation and embracing its magnificence. Each instant unfolds as a miracle, full of meaning and gilded with the beauty of its own uniqueness. I am blessed in this state of grace, for I am given such an opportunity for the asking, because I have given myself over to the service of Spirit, which is here to serve me.


And in that bliss of Beingness, I seek only the Joy that is there for me within that moment of realization. That is my choice. It is also my gift to give and receive.