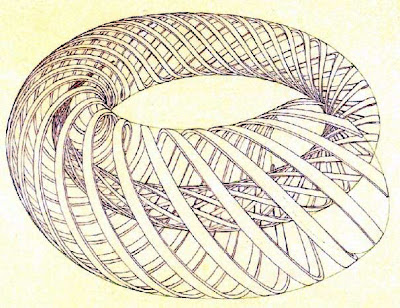 It could be said that the zero point mentality has everything and nothing manifesting simultaneously as implied by the Yin/Yang symbol. For me, it is also like the aperture of a camera, where all aspects of light merge into dark to 'take a snapshot,' as it were, of the felt presence of that moment of being. Then like a photographic slice of memory, we examine the 2D relic of Reality to form 'flat' conclusions. That, to me, is where so-called Western Philosophy hits the ceiling. Science, on the other hand, can only measure Reality infinitely, pretending to draw temporal conclusions from the Nothingness. Both disciplines are based upon argument, logic and mechanical reasoning that have had reigning control these past few thousand years. So in my life, the interesting stuff has always been in the third aspect of that sacred triad: Art. I've managed to derive some level of "truth" through the sincere appreciation of "beauty."

Traditionally Fine Art has been allowed to exist within our society even though it often does not play by the rules laid down by Science and Philosophy. Right? In some ways an "artistic license" in this regard becomes like a passport to regions of freedom not afforded the common man. But, as with all dramatic mythologies, such gifts are both a blessing and a curse. And so, the Artist’s Path is fraught with ambiguity that compels the spirit as it torments the soul.

Posted by Douglas Dolphinus at 9:42 AM No comments: